Note: Motu has just published three Motu Notes on climate change issues prepared as background papers for its Low-Emission Future Dialogue. The first in the series presents an overview of the climate change challenges facing New Zealand and the current policy context.  This information is highly relevant because in 2015 New Zealand will need to present its post-2020 emission reduction commitment - referred to as an Intended Nationally Determined Contribution - under a new international climate change agreement currently under negotiation. The paper's executive summary is provided below.  The full paper is available here. 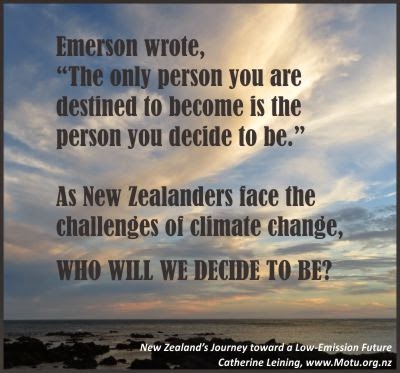 In the coming decades, New Zealand will face important choices shaped by both the risks and opportunities created by climate change. This paper provides an overview of the current climate change landscape from which New Zealand is starting the next stage of its journey toward a global low-emission future. The key findings are:

Climate change science, emission trends and mitigation scenarios The latest reports from the Intergovernmental Panel on Climate Change (IPCC) reinforce the case for significant reductions to global greenhouse gas (GHG) emissions. Under business-as-usual growth in emissions, the global mean surface temperature in 2100 could increase by 3.7oC to 4.8oC compared to pre-industrial levels. A least-cost pathway to limit temperature increases to not more than 2oC above pre-industrial levels would involve reductions of 40–70 percent below 2010 levels by 2050 on the way toward a zero-net-emission global economy. A key objective should be limiting cumulative emissions, and delaying action significantly increases the costs of mitigation.


International negotiations The climate change negotiations are struggling to deliver a comprehensive agreement that will achieve this pathway. However, substantial mitigation activity is underway through national, bilateral, regional and private-sector initiatives. Whether implemented through a central agreement, a regime complex or economic drivers, more stringent global constraints on GHG emissions are likely in the future.

New Zealand’s emission reduction targets New Zealand met its target for the first commitment period of the Kyoto Protocol (limiting net emissions on average over 2008–12 to gross 1990 emissions) with a surplus equivalent to 90.1 million tonnes of CO2eq (carbon dioxide equivalent). This was due largely to Kyoto accounting of forest sinks and purchases of overseas Kyoto units. The following targets are in place for the future:
New Zealand’s emission projections Under current policy settings, New Zealand’s net emissions are projected to increase 129 percent by 2020 and 159 percent by 2030 relative to 1990 levels. Gross emissions are projected to increase 29 percent and 38 percent, respectively. It is not clear how the New Zealand government plans to meet the 2020 target, particularly given harvesting expectations and New Zealand’s standing outside the Kyoto framework.

New Zealand’s mitigation policy New Zealand’s mitigation policy was designed to expose producers and consumers to the international price of emissions and enable them to contribute to global mitigation under the Kyoto framework. It was not designed to impose hard limits on domestic emissions or achieve specific sectoral outcomes. As international emission prices have collapsed, so too have incentives for domestic mitigation in New Zealand. New Zealand has now removed itself from the Kyoto framework, and will need to adapt its domestic policy settings accordingly.
Other domestic mitigation action New Zealand’s businesses, research institutions and non-governmental organisations are engaged in a range of activities supporting climate change mitigation. Most activities fall into three categories: shifting the New Zealand economy toward green growth, mitigation research, and advocacy. A 2012 opinion poll showed a strong majority of public support for more action on climate change, but the perception of climate change as an urgent or immediate problem declined between 2008 and 2012.

If we assume that in the coming decades most countries will support constraints on global GHG emissions to prevent dangerous human impacts on the climate system, then we can also assume that for New Zealand to maintain or grow its political and economic advantages in a low-emission world, it will need to contribute to global mitigation efforts by both reducing its domestic emissions and supporting mitigation by other countries.

The seriousness of the potential environmental, economic and social impacts of climate change demands a shift from incremental change to transformational change in efforts to reduce emissions. The catalyst for that shift currently is missing in New Zealand. Continuing to lock our policy, infrastructure, economic activity and behaviour into high-emission pathways could leave us with stranded assets and slow the uptake of the innovations that would make us more successful in the longer term.

Perhaps if we look at the current climate change landscape with fresh eyes, we can see beyond the barriers to the opportunities for New Zealand. How might we take action to reduce our emissions, not because we have to but because we want to? How might domestic mitigation align with our development and resource management objectives and improve our quality of life? How might we enable rapid innovation across sectors and across the supply chain? How might we stimulate economic growth by increasing public and private investment in mitigation and capitalising on emerging markets in low-emission products and services? How might we engage with producers, consumers and shareholders to drive lasting behaviour change? How might we shift from incremental thinking to transformational thinking about climate change, and outgrow the perception that New Zealand is too small to make a difference?

New Zealand has a proud history of bold projects and new ideas. The challenge before us is how we can harness creativity, connectivity and flexibility to chart an exciting and hopeful pathway toward an attractive low-emission future for New Zealand.

Posted by Catherine Leining at 11:59