Submissions on New Zealand’s post-2020 climate change contributions have opened, but an immediate question for any proposed target is: can we achieve it?

Right now, the price of a unit in the New Zealand Emissions Trading Scheme (NZ ETS) is $6 per ton. Our simple model of what would happen to this market if the Government’s unconditional target of 5 percent below 1990 levels by 2020 were imposed as a cap on the sectors in the ETS with no complementary actions sees the price starting at $110 and reaching more than $250 by 2033.

Our modelling work on the NZ ETS was presented at the WEAI conference in January and the AARES conference in February. Now seems an appropriate time to share some of our findings.

Every model has inputs and outputs. We model the ETS as though it were a simple cap on total emissions (not including methane and nitrous oxide from agriculture), followed by trade. Our model is simple. It includes demand and supply for New Zealand Units (NZUs) in each year, the units people have been banking for future use, any linking arrangements we might have, and a (risk-adjusted) interest rate. The model’s outputs are an NZU price path, an emissions path, and a path of the NZU bank associated with these inputs.

Given the level of ambition of the government’s emissions targets, the price starts at around $110, rises at 5% per year (the rate of interest in the model) until reaching about $264 in 2033. This high price reflects the difficulty of achieving such a target within the NZ ETS and without international linking, which we lose at the end of this month. It is driven by a high level of business as usual emissions - because emissions have grown so much since 1990, a 5% cut relative to that involves a much larger cut relative to current emissions – and a low level of estimated (from others’ models) responsiveness to emissions prices. Responsiveness could probably be increased with complementary policies. 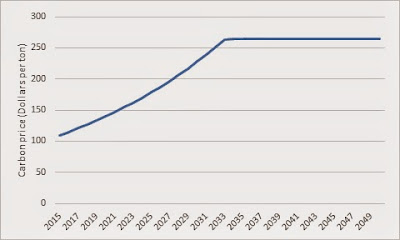 
Even if our model is off by 50%, prices would still be nearly $60 per ton. Or our model could easily be wrong in the other direction – forecasting too low a price.

Our modelled price would cause massive positive benefits for forestry but high costs for other businesses. Modelling in Stroombergen et al. 2009 suggests that over the long term a price of $100 might reduce GDP by 2-3 percentage points. Of course it is important when making comparisons to future GDP to remember that future GDP is expected to be much higher than it is today (MfE is predicting a baseline 36% rise in national income between now and 2027, see page 13 of their consultation document). Our estimated impact on GDP is slightly larger than the 1% reduction in national income that the Ministry for the Environment’s climate change consultation document is predicting for a 5% below 1990 target. They don’t report the implied carbon price or show their assumptions so we can’t explain why our result is a little different from theirs. In any case, a high carbon price may slow growth but it won’t stop it.

What’s clear is that the market is expecting nothing like the level of ambition we modelled for the NZ ETS. So how could we achieve this level of ambition without incurring such a high price? A future blog post will look at some potential alternative options, including future linkages to an international carbon market.

The rest of this post details how we got the result in Figure 1. 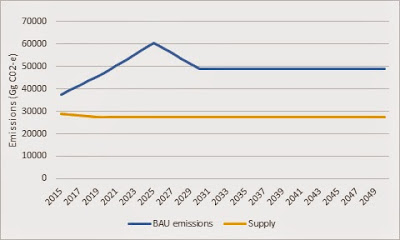 Our other modelling parameters are as follows:

BAU: We use estimates derived from the Ministry for the Environment’s Sixth National Communication for all non-agricultural sectors’ business-as-usual emissions – see Figure 1. The sector estimates in the Sixth National Communications go out to 2030, but our model is out to 2050[2].  It is very difficult to say what BAU will be beyond 2030. Our model simply assumes that BAU stabilises at 2030 levels.

Demand: This is a simple linear demand curve in each year. It is defined in each year so that when the price is zero the number of units demanded equals BAU. As the price of NZUs rises by $1 the quantity of units demanded falls by approximately 80 Gg CO2-e. This slope is a ballpark figure based on the results from more sophisticated CGE modelling performed in Stroombergen, Schilling, and Ballingall (2009)[3].

Linking arrangements: No international links. The NZ ETS’s links to the Kyoto market are due to expire at the end of this month. Going forward NZ ETS participants will have no access to these cheap units, and will need to meet obligations using New Zealand Units.

Bank: We estimated the size of the current bank to be around four times 2015 BAU emissions[4].

Figure 3 shows emissions relative to supply and BAU. The gap between the emissions and supply, the red and gold lines, reflects the amount of banked units that are being used up. 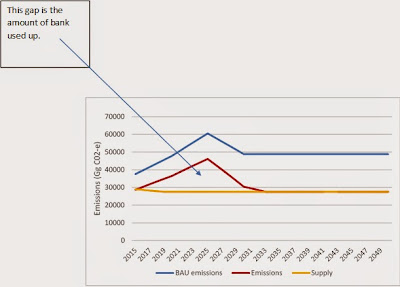 
[1] We calculated 1990 levels as the non-forestry, non-agricultural emissions for 1990 which we sourced from the Ministry for the Environment’s Sixth National Communications.

[2] Hence BAU here includes some emissions which are not covered within the NZ ETS, particularly in the forestry sector where participation is voluntary for post-1990 forest. What matters for our model, however, is not the level of the BAU path, but rather the shape of the BAU path and the overall slope of demand.

[3] We calculated this as follows. We used the NZIER reference case long run estimates (see the last two columns of table 8 on page 24 of their paper). These estimates indicated that a $25 price would cause emissions to fall by 5.5 percent relative to BAU and a $100 price would cause emissions to fall by 21.3 percent. These estimates are some of the more price-responsive estimates in Stromombergn et al.’s paper, and in this sense bias us toward too low a price. These estimates lead to a slope that implies a 1% fall in emission leading to about a $4.65 price rise. We expressed this slope relative to 2015 BAU (where 1% of emissions is approximately 376 Gg of carbon), to calculate a slope that does not vary over time.

[4] It is not yet known what the actual number of banked NZUs will be, so we estimate this based on the number of NZUs in the registry at the end of 2014. We calculated the size of the bank by comparing this number with 2015 BAU projections with and without forestry. In either case it is four times 2015 BAU rounded to the nearest whole number.
Posted by Ceridwyn at 11:08