Where can households make a difference to their emissions? 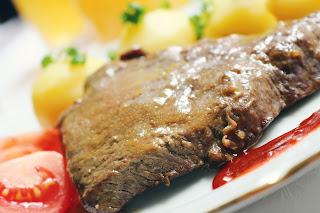 Motu has just released new research identifying where households can make a real difference to their greenhouse gas emissions – and cutting down on red meat and purchasing an electric vehicle are top of the list.

Corey Allan, Suzi Kerr and Campbell Will looked at information from the 2006/7 and 2012/13 Household Economic Surveys1 and found many opportunities for ordinary Kiwis to reduce their impact on climate change.

While most households are taking at least some actions that reduce emissions, the actions they are choosing are not necessarily the ones that will have the biggest emission benefits. To give the general public more information about what sources of emissions have the most impact, Suzi and Corey worked with ChewyData and the NZ Herald to compile The Household Climate Action Tool, hosted by NZ Herald Insights. This uses averages of annual spending and household purchases to help people figure out their household’s best choices to reduce emissions.

The Household Climate Action Tool allows people to see the result of the choices they make and gives them more information about the best ways for their household to save emissions. The aim is to show people that climate change solutions are possible at the individual level and to show people how to take effective action.

Food, transport, housing, and utilities account for 82 percent of household emissions. Households looking to reduce their emissions should look at what they consume in these categories first, so they can make meaningful change.

Key ways for households to reduce their emissions are to reduce their consumption of red meat and dairy products, increase their car’s fuel efficiency, or shift from driving to walking, cycling or public transport. Households can also have some impact on their emissions by decreasing their home electricity use.  For those who travel internationally, reducing that travel has a big impact. For higher income households, choosing to work less, and hence consume less, will tend to lower emissions. 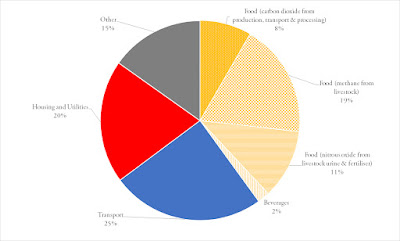 The differences in emissions within income groups are mainly driven by differences in transport choices. The richer, higher-emitting households fly internationally more often. Regardless of income, the households that emit the most drive more.

There is also some difference in diet, with the higher-emitting households eating more meat and dairy than the lower-emitting ones. The graph below looks at the variation in household emissions for two-person households with the same level of expenditure.

Variation in emissions by household expenditure 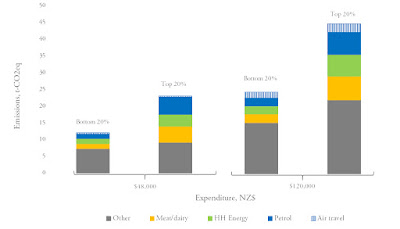 Household energy is the way a house is powered – usually by electricity and gas, but also including coal and firewood.

The research also found that, on average, household expenditure and household size and composition are the most important determinants of a household’s emissions. Emissions also tend to increase with household age and tend to be higher in South Island households, possibly because of the colder climate leading to an increase in heating.

There is, however an ‘Auckland effect’ in international air travel emissions. This is possibly because Auckland has a high population of immigrants who travel overseas more frequently.

Another finding of the research was that New Zealand households emit 4.6 percent less greenhouse gas than they used to. This is a fall of approximately one tonne of emissions for an average two-person household that spends $80,000 per year. That’s the equivalent of the emissions involved in taking five trips from Picton to Bluff.

Emissions from consumption by individual households may be falling, but due to the rise in New Zealand’s population, the amount of greenhouse gases entering the atmosphere from Kiwi households’ overall consumption is increasing. 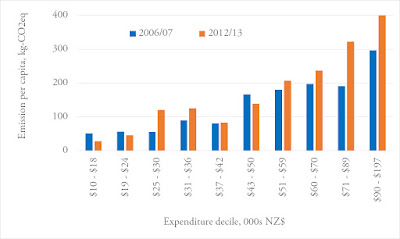 You can, of course, be wealthy and choose not to travel internationally. But we are seeing wealthier households travelling internationally more often.

The report Are we turning a brighter shade of green? The relationship between household characteristics and GHG emissions from consumption in New Zealand by Suzi Kerr, Corey Allan, and Campbell Will was funded through Motu’s programme “Shaping New Zealand’s Low-Emission Future,” supported by the Aotearoa Foundation.


Hints for reducing household emissions from EECA and Z Energy
Cutting down the amount of red meat and dairy your household consumes will reduce the amount of methane and nitrous oxide released into the atmosphere.

Efficient driving behaviour, pumping up tyres regularly and keeping your vehicle tuned typically results in a 5-10% reduction of fuel bills, and in some cases more.

Most households could reduce their electricity consumption by about 10% through some simple actions, like turning appliances off at the wall, drying clothes outside in the sun instead of using the dryer, keeping showers short and using efficient light bulbs in most used fittings. Choosing ENERGY STAR labelled appliances, installing an efficient showerhead or replacing electric heaters with a heat pump in main living spaces can result in even higher savings.